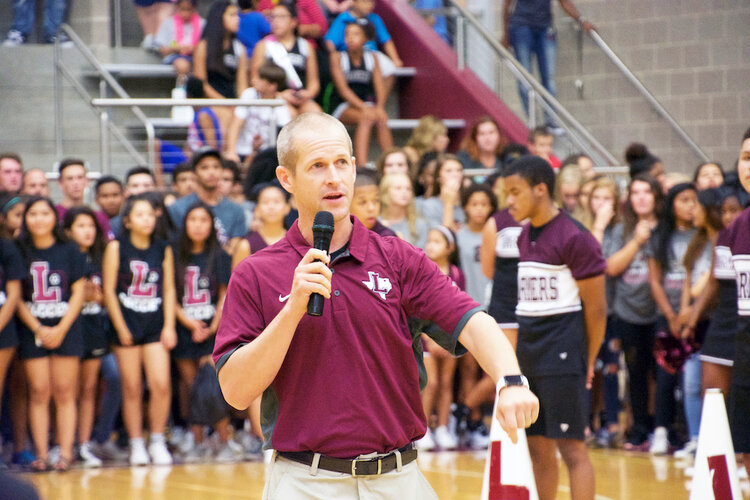 It was December 14, 1996 in Waco, Texas at Floyd Casey Stadium. The Lewisville High School Fighting Farmers had just captured their second football state championship in four years, defeating Converse Judson, a San Antonio area powerhouse, 58-34. It’s a game a lot of people remember, even today, because the Farmers won the high-scoring game without ever even attempting a pass.

The championship win and perfect season electrified an already tight-knit community, and Lewisville left its mark on Texas history as the first team to have won both the Division I and Division II Class 5A state titles in football. Leading the 1996 Class 5A Division I state team was a quarterback, a three-year letterman, by the name of Michael Odle.

“Being able to battle with my teammates and come away with the state’s largest classification championship was a testament to our coaches, team chemistry, and support of our community,” Odle said. “I am still in touch with many of the players on that team, and we enjoy telling stories and reminiscing about 1996.”

After graduating from Lewisville High School, Odle attended college at the University of North Texas, receiving a Bachelor of Science in Kinesiology. He soon found himself coaching the game he loved, starting his coaching career in Lewisville Independent School District as an assistant at Marcus High School. Odle then had coaching stops at Barbers Hill and Coppell before coming back to LISD, taking over as offensive coordinator at Hebron High School for two years.

“Like most athletes I didn’t think about the time where I wouldn’t be able to compete anymore but as soon as those days crept up on me I knew I wanted to be a part of the game and to impact the lives of young athletes as my coaches did to me,” he said.

But what makes this story so special?

In the spring of 2017, Odle’s personal and professional lives were about to collide in the best possible way. After the departure of Gregg Miller that March, Lewisville High School was without a head football coach. A search was immediately underway, but the storied program knew that while it wanted to win, the team needed a leader who knew the community and understood what it truly meant to have “Farmer Pride.”

Pride and tradition runs deep in Lewisville ISD. With roots dating back to the 1800s, the district’s rich history deepens its connection with the community. Generally speaking, going to school in LISD means having teachers, coaches and administration who once attended school in the district. LISD employees have a sense of pride and belonging — often describing the district as a family — and have a vested interest in the communities in which in the district serves. Students and families are often given the opportunity to connect with those who helped build the district into what it is today, like Mr. Ben Harmon and the late Mr. Doug Killough, nearly permanent fixtures at their respective namesake campuses.

Although Odle was coaching at a fellow LISD school, Hebron, and loved being there, knowing his alma mater’s position was available had him longing to come “home,” and he knew he couldn’t let the opportunity pass him by.

“There was no doubt that this is where I wanted to be and was called to be,” Odle said. “The first thing that crossed my mind when it opened was, ‘I am ready to go back home.’”

On April 10, 2017, LISD announced Odle as the next head football coach for the Lewisville High School Fighting Farmers. At the time of Odle’s hiring, Lewisville High School Principal Jeffrey Kajs said, “Being a product of Lewisville High School, I believe every student can and will relate to Coach Odle. His understanding of Farmer Pride and the tremendous traditions will be a huge advantage for all of LHS and Farmer athletics. In addition to his leadership, he brings an excitement and passion to Farmer football that Lewisville deserves.”

“The Farmer Pride is alive and pouring through my soul,” he said. “I get excited every day that I’m here because this place is who I am. It helped raise me, and I’m here to give back through the wonderful game of football.”

He added, “Our district is committed to excellence and does right by our student-athletes to ensure they have every opportunity to be successful on and off the field. I’m proud to be a Lewisville Fighting Farmer.”

Last season, Odle led the Farmers to its first postseason in 11 years. On November 16, 2018, Farmer fans filled the home side of Denton ISD’s C.H. Collins Athletic Complex for the bi-district game against Keller High School, outnumbering its fans. And, in thrilling fashion, the Farmers won its first playoff game since 2007 — topping Keller 33-27 in triple overtime. Farmer Pride could be felt around the stadium as it erupted with excitement. Although Lewisville ultimately fell to Duncanville in the next round, the future is bright for the Fighting Farmers.

“I have met and coached so many great young men who have impacted me and my family, and I only hope that I’ve been able to impact them, too,” Odle said. “I look forward to many years to come, serving the community of Lewisville and its high school as the Fighting Farmers head coach. Lewisville is a great place to be, and it’s never been a better time to be a Farmer than it is right now.”